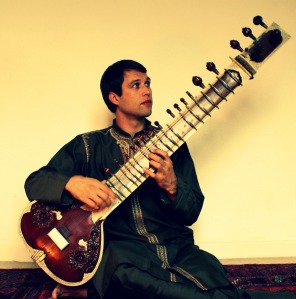 Michael Griska performs and teaches North Indian Classical Music better known as Hindustani Music on the sitar and surbahar.  He is a disciple of world renowned sarod player, K. Sridhar.  Michael has traveled in and out of the U.S.A. studying, performing, and accompanying his Guruji, K. Sridhar.

Some of his experiences include: playing the tanpura and keeping tala for his Guruji at the Smithsonian in Washington D.C. and at the 2012 Stockholm Sangeet Conference in Stockholm, Sweden – performing sitar and surbahar at K. Sridhar concerts in various cities in North Carolina – performing sitar and surbahar at numerous house concerts and temples in India, Israel, Denmark, France, Sweden, and U.K. – performing for Indian weddings at the Carnegie Museum of Natural History and William Penn Omni in Pittsburgh PA, at Duke University in Durham NC, and in the Biltmore House in Asheville NC.

Michael performs, teaches, and fixes instruments from Pittsburgh to New York to Washington D.C. and all throughout the Carolinas of the USA.  If you are interested in scheduling Michael for: concert performance, lecture/demonstration, wedding performance, yoga music accompaniment, music lessons, or instrument maintenance (including Javari) call or email: 412-414-8617, michaelgriska@gmail.com.

T.V. Interview that aired on WQED on October 9, 2014 on the program “Pittsburgh 360”. Also includes clips of Michael Griska’s performance at the at the Carnegie Library of Pittsburgh for the World Kaleidoscope music series on July 27, 2014 in Pittsburgh, PA. Click here to watch the full program http://wqed.org/tv/watch/?id=1070&series=4&page=0